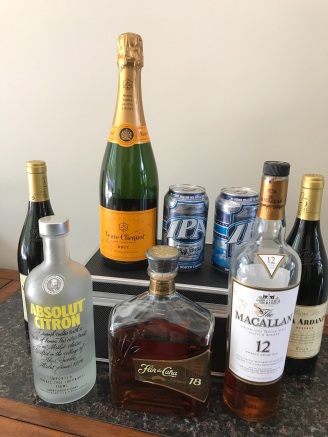 Drinking alcohol can be a trap – something I’ve learned after NOT drinking it for the past 90-days+.

For most of us, beer, wine and/or liquor drinks are a default part of our daily lives. From a relatively young age, we have become conditioned to drink without even thinking about it. Social events, business events, cooking dinner, eating dinner, after dinner, parties, food-pairing, special events, while boating, while watching sports, after exercising, when at the beach, après ski, celebrating, commiserating… these are all prompts and reminders for us to drink. We don’t have to look very hard to find a reason or place to ‘have a drink’.  This is socially accepted and encouraged by the beer, wine and liquor industries whose marketing is very effective. Whether we realize it or not, we are socially and behaviorally conditioned to drink and it is likely an embedded part of our lives.   And, by the way, the liquor business laughs all the way to the bank.

Why I decided to pause from drinking:

The main reason is that I noticed I was developing belly fat, despite the fact that I exercise regularly and eat very cleanly. I concluded that the fat must be from drinking. So, I planned to stop for 30-days to see how I’d feel. Within 10-days of stopping, I felt immediately better. I starting sleeping more soundly, waking up more energized. After about 20-days, I was now fully energized from sleeping better, feeling better during the day and had lost about 5 pounds, all from my belly!

Now that 90-days has passed, I intend to continue my alcohol-free life as much as possible. I realize that my life is just as good or better without the habit / trap of alcohol. I’ve sat at bars and been totally content sipping club soda. I enjoyed a ski trip without drinking ‘apres ski’. I even spent 2-weeks in Mexico on the beach without drinking one beer! I still had a good time. And, finally, I attended a wedding with full open bars throughout the weekend and feel that I had as much fun as anybody else, despite not drinking at all. The difference… I feel better, sleep better, and wake up energized EVERY DAY!   Like anything, we adapt. I’m now totally fine going to bars, parties, events and traveling without the default trap of drinking.

Now that I’m not drinking, I’m more aware of those who are. Last week, I met a friend for a drink. He proceeded to drink 3 pints of craft beer before dinner, and another 3 pints at dinner, while I sipped soda water. Observing him drink made me rejoice that I was not. He just consumed approximately 1200 liquid calories to add and let’s not even discuss how poorly he will likely sleep and feel the next day.

So, here’s why I got Smarter Sooner about drinking:

After 90+ days without alcohol, I found it much easier not to default to drinking. Like anything, the mind and body adapt… I’m now feel much less pressure (self-imposed mainly) and am quite happy sipping soda water when others are drinking vodka. I realize that I have just as much fun as those drinking and, honestly, nobody cares. I’m also more inspired than ever to exercise, feeling much more energetic in the mornings, sleeping better and having lost 10+ pounds of alcohol-induced fat!

Will I ever enjoy a glass of wine or beer again? Definitely. But, right now I’m perfectly happy without it.

Try it for 30-days… you will be inspired and liberated. After all, it’s only 30-days. It’s definitely smarter to know how alcohol drastically impacts our lives.

One thought on “The Alcohol Trap”